GN Solids Control manufactures various solids control and waste treating equipment, basically GN product line cover all the equipment in the oil and gas industry. Every year, GN Solids Control receives many inquiries on mud agitators, here is one inquiry we would like to share with you: USA Solids Control system of GN america company  is for on-site treatment and removal of waste water-based mud slurry ultrafine solid development of skid-mounted physico-chemical treatment systems. 10 µg of mechanical separation of slurry separation of solid particles is very difficult, especially for about 2 μg of colloidal particles (low specific gravity solid-phase) can do about it. Whether on land or at sea, in waste management operations, treatment of waste mud face two issues: one is to reduce the volume of waste and subsequent processing costs, the other a recovery based liquid to achieve recycling. USA Solids Control system is necessary. Chemical treatment methods can make solid-free (clarification) water recovery from failure of drilling fluids, isolate and low rate of liquid-solid phase for further processing, these solid-state weight and volume than the original expiration of the mud becomes negligible, transfer and further processing costs are also much lower. In environmentally sensitive and water-poor regions in drilling operations, use of slurry dewatering system will bring about many benefits, and regulatory and economic considerations are almost essential. 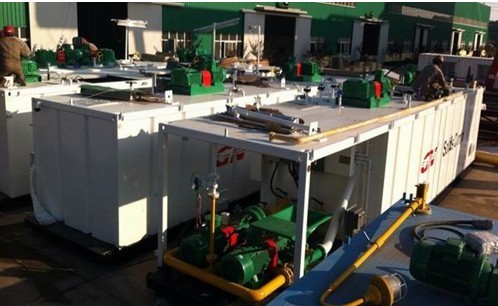 The solids Control system for colloids or close to the colloidal particles, and factors that contributed to the solid phase precipitation is far from overcoming fluid relative to its suspension. Chemical treatment methods can change characteristics of mud, so that most of the suspended particles can be separated  by mechanical methods. Centrifuge feed stream of appropriate chemical (flocculation and other reagents) enables colloidal particles aggregation formation of floccules, resulting in slow precipitation under the action of gravity or centrifugal force. This principle has been widely applied in sewage treatment and other practice, but the nature of the solid-liquid system of mud and sewage are very different and, therefore, chemical reagents selection and isolation of structures are very different.

If we operate the cuttings dryer system after long time off status, we need to inspect motor rotary unit on insulation. Use 500V Ω gauge, get resistance is not larger than 0.5MSZ, we can run the shaker

Notice: ① If the motor doesn’t run at all, we must shut off the power immediately to avoid motor broken
② After starting motor, to inspect, whether this is any problem. If there is any break off or uncommon noise. If two motors are not running in-phase we need to stop the motors and get rid of problems then turn it on again for operation
③ When motor is under cold status, should not be started 5 times continuously; when motor is turned off under hot status, the restart can not be over 3 times continuously
Shaker screen maintenance
① Before every shut off, the shaker should run without any medium for 5-10 minutes, at the same time, use clean water to flush screen clean
② Every time finish operation, the shaker frame and screen should be flushed by water (summer) or steam (winter), there should be not much sediment on shaker frame and shaker screen. Especially when the drilling mud has large viscosity and high density or screen is finer than 60 mesh. Otherwise, the particles and fine sand on screen will block screen hole, when we start shale shaker, it will decrease filtration result and lead drilling mud flow away, lose much unnecessary cost.
cuttings dryer maintenance
Electric control cabinet is explosion proof magnetic starter, the electric principle is as fig VI, if there is any trouble we must shut off the power, and repaired by electrician or specific person
Spare parts for GNPS752
No. Name Model Unit Qty Remark
l Vibration motor MVE2400/15D Set 1 1.0kW
2 Vibration motor MVE1100/15D Set 1 0.4kW
3 Shaker screen 750×900mm PC 2 40/20目
4 Tension wedge PC 4
5 Spring PC 4
6 Damping horizontal strip PC 4
7 Damping vertical strip PC 4
8 Enclosed files for GNPS752
9 GNPS752 Shale shaker user manual 1 set
10 GNPS752 Quality certificate on shale shaker 1 set
Resource Box :
The author of the article recommends,if need pls contact us

This section contains a summary of WARNINGS. The ZCQ Degasser has been designed to perform the stated functions safely.

All persons responsible for operation and maintenance of this equipment must read and understand all safety information in this manual prior to operating and/or maintaining the equipment. The safety warnings listed below are included in applicable procedures throughout this manual.