Jet mud mixing system is a normal and necessary part of most kind of drilling mud systems and liquid mud plant (LMP). It is used to prepare new mud and qualified mud, and service for drilling activities. The mud mixing system can be used to mix oil based mud (OBM), water based mud (WBM), as well as synthetic based mud (SBM).

Jet mud mixing system is actually a combination of mixing pump, mixing hopper and control panel. All of them connected by pipelines, they can be mounted on the tank separately per tank layout. They can also be mounted on the same skid as a complete unit.

The jet mixing hopper is also called shearing hopper. It can be mounted on different position of the mud cleaning system for different purpose.

1) The jet mixing hopper can be mounted on the top of the mud tank. Advantage of the tank top hopper is easy for mixing chemical as the gravity. But you should to consider lifting of the chemicals. Sometimes, it is even 1 ton big bag. you should consider the necessary device to help for the chemical lifting. Operation table and crane cradle is the popular way to service for it.

2) The normal way is to put the shearing mixing hopper on the tank skid, next to centrifugal mixing pump. The mixing performance may not as good as on the tank top, but also acceptable. And it is easier for the chemical lifting.

3) Another way for the shearing hopper is on a separate skid with centrifugal mixing pump and control system. The complete is in a separate skid. It is more flexible for application. Users is easy to more the mixing unit from one jobsite to another jobsite, or move it from one tank for another.

The Working Process of GN Oil Sludge Treating Equipment
GN Solids Control manufactures varieties of sludge treating equipment. Oil sludge or industrial sludge is two typical sludge that clients are treating quite often with the increasing demands and awareness of environment protection.
GN Solids Control provides turnkey solution for oil sludge treatment. So how the working process of oil sludge with GN equipments?
1. An excavator is used to put the oil sludge in one Feeding Hopper with screw conveyor. The large V-type hopper is used to collect the all those sludge before feeding into one Sludge Washing Machine.
2. The GN Sludge Washing Machine is fixed with hot water and steam feeding pipes as well as mud agitators. Hot water and SAS chemicals are added into the oil sludge and hot steam is also feed into the sludge washing tank in order to have a better fluidity.
3. GN Hi-G Shaker (G force up to 8.0G) will separating the oil sludge that feed by one screw pump. GN Screw Pump is using the world famous brand—Netzch. Here the oil sludge is separated into two parts: oil slurry (a little bit cleaner) and coarse solids (oil is less than 2%). 4. With the help of one GN Flocculants System, those oil slurry will be pumped into GN decanter centrifuge. GN centrifuges are widely used for 2 phase separation. Solids larger than 2-5 microns can be separated out by GN decanter centrifuge. By adding some chemicals in the oil slurry, small solids will be gathered and separated out. And the fine solids can be further treated by one TDU to eliminate all the oil in the solids. 5. For those liquids discharged from decanter centrifuge, they will be send into one Oil and Water Separator. Then the clean oil and clean water can be carried and transported to other work sites. Besides, the recycled water can be send to a heater to provide hot steam and hot water.

Although when talking about the products provided by GN Solids Control, in the oil and gas industry, a lot of people’s first image is the line of high quality decanter centrifuges, but in fact, the traditional products of GN Solids Control is solids control equipment like shale shaker, desander, desilter, shear pumps and shaker screens. Recently, GN just finished the fabrication and the delivery of one complete set of mud cleaning system for a trenchless project contractor and the treating capacity is 120cbm. 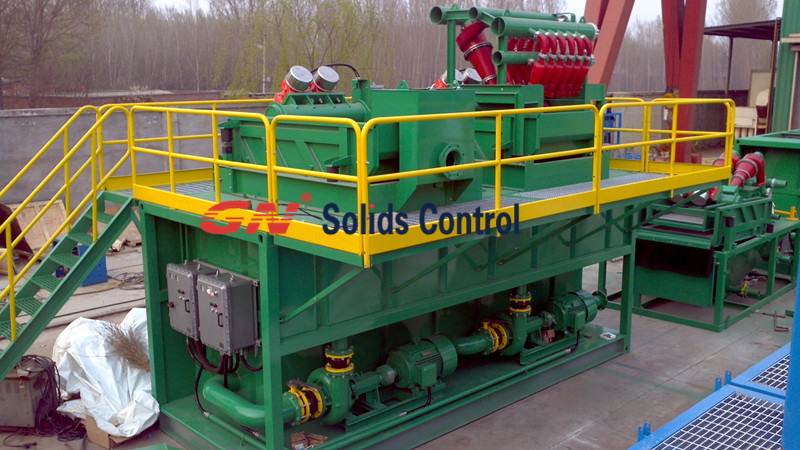 Ever since its establishment 9 years ago, GN has been providing following products and solids control lines for following industries:

Plsadvise more information about your project, GN will give a most suitable solution for you.