Most offshore drilling equipment has more strict requirement to equipment quality, no matter the rig machine or solids control equipment. The manufacture need to make them with higher grade standard. As usually API standard was acceptable by most countries of the world. Offshore drilling equipment require most times will require DNV lifting , higher explosion proof standard and also the anti corrosive coating since the ocean environment has high corrosive to equipment. GN solids control has more than 15 years .We exported to more than 75 countries and provide equipment to many top oil gas industry in the global, and built long term cooperate relationship with them.

Last week we delivered several sets cutting drying high G shale shaker to offshore drilling platform. These shaker are specially designed for offshore drilling waste management application. This high G shaker was used to treat drilling cutting. The vibration G force can more than 8 G, and the normal shaker is 7.5 G. This shaker can recycle partial drilling mud from drilling cutting and dryer cutting to convenient transporation. It is helpful to reduce transport cost and for the further process. As we all know drilling mud is high solution ,even the drying drilling cutting to be treatment by profession device to reduce pollution. 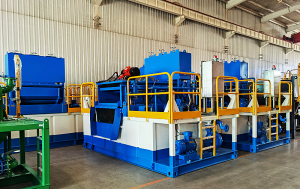 From the photos we can see, this high G shaker equipped a vacuum device to generate a negative pressure to suck the liquid from solids cutting and recovery them. This design makes our high G shaker very popular in the market, and client use them to recycle drilling mud. BTW, we also designed the anti splash device to cover the shaker to meet the offshore platform requirement about clean. All these was designed by GN own.
GN can provide a entire series solids control equipment and wast management equipment for drilling industry. We are good at customized build system according to client requirement. Such as mud system, drilling cutting treatment system. If your project have demanded on these equipment, welcome to contact us.

The drilling well site must be equipped with at least one vibrating screen. The purpose of shale shaker and other solid removal equipment is the same, which is to reduce the drilling cost. Drilling fluid always require the particle size and content in drilling fluid. Shale shaker can remove out the big size solids contend in the drilling fluids backed from well. If there solids can not be removed timely, which may cause lots problems in drilling. 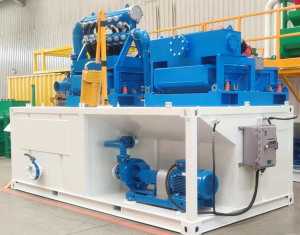 The selection of screen cloth. it is said that some professional software can be used to select the mesh number of vibrating screen cloth. However, the data used in these software are basically obtained from the cobalt well fluid prepared in the laboratory, so they have some limitations. Any drilling fluid treatment agent formula may reduce the treatment capacity of the shale shaker system. For example, cobalt well fluid containing starch is difficult to screen, because starch, as a good filtrate reducer, tends to “paste” the fine screen holes. The drilling fluid with high static shear force is also difficult to pass through the fine screen. Therefore, the vibrating screen cloth that should be used to deal with a certain fluid flow rate is not introduced here. The selection of screen cloth for various drilling fluid shale shakers is mainly determined by repeated test method. It is best to contact the manufacturer and ask for suggestions on the selection of screen cloth in this area. 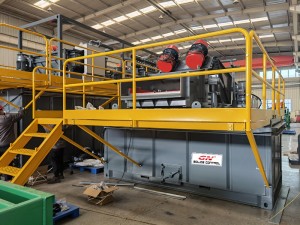 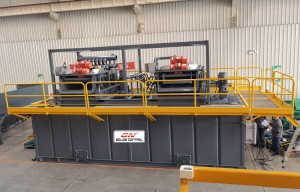 GN solids control has been in shale shaker manufacture for more than 15 years, we can provide different type shaker according to client requirement. If you have demanded , welcome to contact us.

During the drilling process, the density of drilling fluid will be reduced and increase the viscosity after being invaded by natural gas or air. The decrease of drilling fluid density leads to the decrease of hydrostatic column pressure, which may lead to blowout, well collapse and other malignant accidents. Therefore, the gas invasion drilling fluid is very dangerous, and measures must be taken to deal with it correctly. 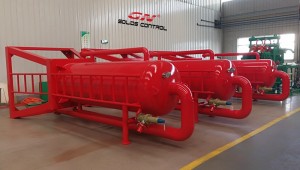 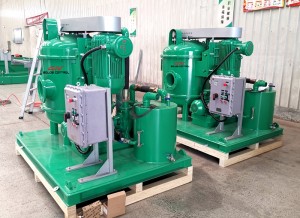 In order to restore the density of drilling fluid, the most effective means is to use degasser. GN solids control can provide two degasser. The normal poorboy degasser and vacuum degasser. First kind is installed before shaker. Received the drilling mud from well, and vacuum degasser installed between mud cleaner. They utilized different principle, first kind through increase touch area when mud drop on the bottom of tank, brake the bubble involved in mud and move out gas. The vacuum degasser through generate a negative pressure space to make the gas out of mud. Both kind degasser will be need in one full mud system. If you have demand, welcome to contact us.